Marten Lange-Siebenthaler runs Dreizackreisen, a Berlin travel agency specializing in Eastern and South Eastern Europe and the Baltic States. The company has been organizing trips to Ukraine since 2006. The country is extremely popular with its customers.

Since Russia launched its attack on Ukraine on February 24, however, holidays in Ukraine are out of the question.

Lange-Siebenthaler, who has close ties to Ukraine, has now turned to sending humanitarian aid rather than tourists to the war-torn country. He delivered a first load of goods in the early days of the war.

DW: What exactly are you doing to help people in Ukraine?

Marten Lange-Siebenthaler: We have contacts in Ukraine and have learned from them what is most needed in different cities. We try to meet these specific requests. Our approach is different from that of large aid agencies, which do important work. Our approach is to determine what items are needed where, and then supply them.

What are the most needed things in Ukraine?

Our first delivery to Ukraine consisted of canned goods, outdoor equipment such as tents, camping mattresses, sleeping bags as well as power banks and flashlights.

Medicine, dressing material, tranexamic acid [to halt heavy bleeding] and so on are in need. We are currently arranging medical supplies for the ambulances. We are seeing regular vans being converted into ambulances, which is why we are currently researching defibrillators, ECG monitors and such devices.

Sorting aid for Ukraine at Marten near Berlin

You started your first aid delivery in Ukraine just days after the war started. Tell us about your experience.

We rented a Mercedes Sprinter van. My friend and I set off for Poland, reaching the south-eastern town of Chelm at 3 a.m., where we rested for four hours before continuing to the Dolhobyczow border post at 7 a.m. .

During our trip, we contacted a friend, who usually works as a Ukrainian tour guide for us, to coordinate the transfer. It’s a very organized affair at the border: Polish officials guided us to the Ukrainian checkpoint, which then sent us down a lane leading to a parking lot on Ukrainian soil. Our Ukrainian partners joined us there and we were able to quickly unload our humanitarian aid.

And then you went straight back to Germany?

Yes, although we wanted to keep an eye out for anyone who might want to join us on the return trip. It was not easy to find people behind the border. We spoke to several people who told us about a place in a nearby town that helps refugees travel safely.

A member of the Polish Armed Forces put us in touch with two women and a child looking for a ride. We dropped them off in Wroclaw [a city in southwestern Poland]. The authorities recorded the personal details of all the refugees and those transporting them; we had the impression that everything was organized in a professional manner. 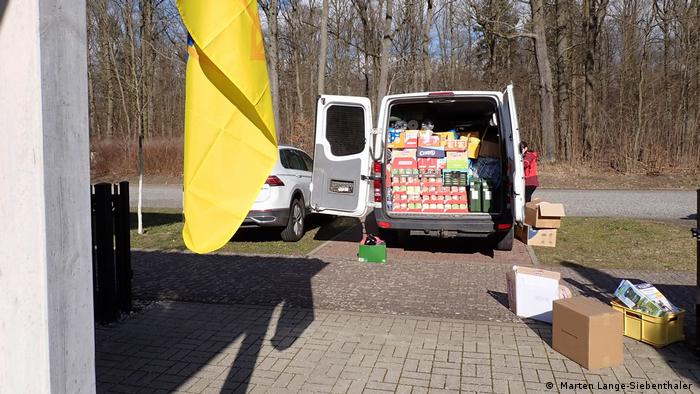 Help is delivered in a small van directly to the border

Do you plan to provide more aid to Ukraine? If so, what items will you deliver and when will you ship them?

We started a fundraiser on Betterplace.org to buy an emergency generator for a hospital in Brody, a city in western Ukraine. We raised the funds fairly quickly. Now we are organizing how to transport the generator to Ukraine in the next few days.

We have decided to continue our fundraising in light of the overwhelming support we have seen. With so many other needed items, we are now raising €10,000 ($11,000) to purchase medical supplies and equipment. We have already collected half of this amount. We will arrange separate transport for these items.

How have the developments in Ukraine affected you emotionally?

To see women and children crossing the border with only two or three small bags of personal effects, knowing that they are heading towards an uncertain future, is truly saddening. The same goes for friends and acquaintances from eastern, southern and central Ukraine who had to flee. Hearing their stories and the pain they go through won’t leave you indifferent. Following the news of the Ukrainian media, provided you speak the language, all of this is destabilizing. So yes, seeing what is happening in Ukraine touched me deeply.

This interview was conducted in German by Marco Müller.